The fire on Lingard Lane in Bredbury continues to burn and GMFRS expect to be at the scene for most of the day.

The Fire Service has recovered a number of propane cylinders from the site and has made them safe. Crews are fighting the fire from the outside and above, rather than enter the building where more cylinders could be stored.

Later in the day some heavy machinery may be required to aid the strategic demolition of the building to assist with the firefighting effort.

The wind continues to direct smoke away from the motorway network while the local railway line remains unaffected. However, low lying acrid smoke in the immediate vicinity could cause congestion on the roads and motorists are encouraged to take extra care.

The smoke has impacted on local businesses with a bakery and petrol station opting to close for the morning.

GMFRS firefighters have been visible in the local area, updating and reassuring the community. Residents are still requested to keep doors and windows closed until the smoke dissipates.

Crews remain at the scene of a large fire at an industrial unit in Bredbury, Stockport, and will be for some hours to come.

GMFRS have isolated the blaze to a single building which is well alight.

Group Manager Dean Nankivell, who is in charge of the incident, said: “Crews from six stations from across Greater Manchester remain at the scene of this fire and we will be here for some time.

“We are battling the blaze both from ground level and from above using a hydraulic platform.

“The weather conditions are poor. While the rain might aid us in fighting the flames, the high wind speed means billowing smoke is drifting from the scene and over neighbouring domestic and commercial properties on Lingard Lane and Ashton Road. We are asking local residents to keep the doors and windows of their houses closed for the time being.

“The better news is that the wind direction is blowing smoke away from the nearby junctions 25, 26 and 27 of the M60 motorway as we approach rush-hour.”

Lingard Lane remains the only road closed in the area as a result of this incident and the railway line linking nearby Bredbury and Brinnington stations is unaffected.

Six fire engines and other Greater Manchester Fire and Rescue Service (GMFRS) appliances are currently at the scene of a large fire at an industrial unit on Lingard Lane, Bredbury.

GMFRS were called to the scene near Stockport at 3am this morning (Friday 21 September) and crews from Stockport, Ashton, Hyde, Whitehill and two from Gorton responded quickly and are in attendance.

The fire, affecting a building housing a large quantity of industrial waste, currently measures 40 metres by 30 metres. To best manage the blaze crews have divided the scene into two distinct sectors of firefighting and are engaged with working to subdue the flames.

Weather conditions are poor and given the amount of smoke the fire is generating and the wind speed local residents are asked to remain inside and keep windows and doors closed.

Lingard Lane is the only road in the area currently closed due to the incident. 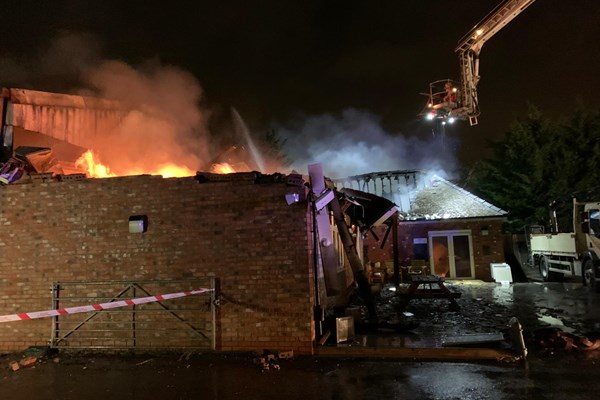