Crews have been working hard to assist residents at a number of homes on Walmer Street in Gorton following the suspected collapse of a sewer yesterday evening (Wednesday 20 January).

Greater Manchester Fire & Rescue Service (GMFRS) was called just after 9pm following reports of an unoccupied motor vehicle half-submerged in a hole which had developed in the road surface.

Firefighters from Gorton station were soon at the scene and acted swiftly to erect a cordon around the hole, which measured approximately 10ft in diameter. Working with colleagues from Greater Manchester Police (GMP), Manchester City Council and United Utilities, several other vehicles were removed from the street. Residents from four nearby homes were evacuated as a precaution and accommodated locally. 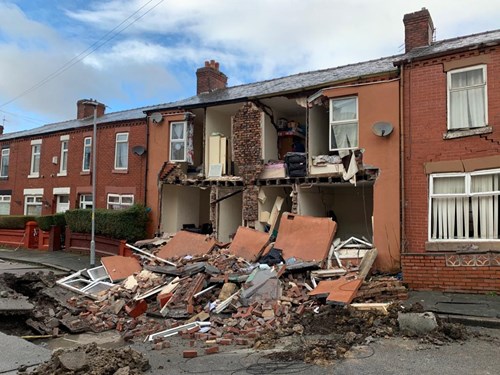 Today (Thursday 21 January) GMFRS was called back to the scene at 11.10am following reports that two of the evacuated buildings had sustained partial collapse.

Upon arrival, a crew on the Technical Rescue Unit from Ashton station worked to keep members of the public from approaching the potentially dangerous structures. Neighbouring residents were helped from their homes and firefighters remained at the scene until relieved by colleagues from building demolition. GMFRS was at Walmer Street until 2.30pm.

Station Manager Andrew O'Brien from Hyde, who attended the incident today, said: "I want to praise firefighters for their swift work in making the scene safe this lunchtime, and in doing so preventing a risk to local residents' health and safety. Crews also worked through the night at this scene, during the height of the stormy weather, and their hard work is testament to their professionalism. The safety of the public was our primary concern overnight and again today, and I'm pleased to say no-one has suffered any injuries."