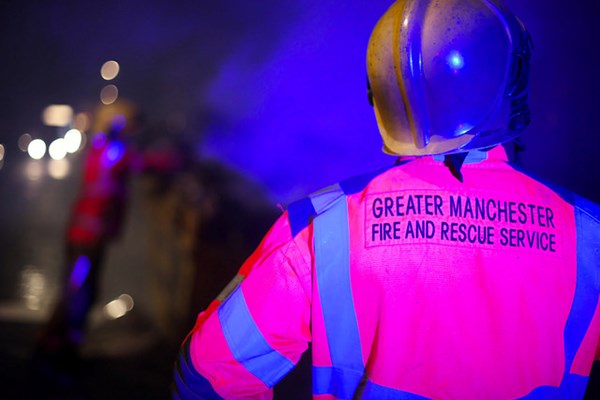 Crews are continuing to work this morning to extinguish the fire at a recycling plant in Salford.

Firefighters worked through the night battling the fire, which involves a large quantity of waste, and it is now under control.

Four crews and a high volume pump remain at the scene tackling the fire and the plume of smoke has reduced considerably. People are still advised to keep windows and doors closed in the area. The air quality has been tested and the fumes produced as a result of the fire are not toxic or hazardous.

The plume of smoke has now reduced considerably but people are still advised to keep windows and doors closed in the area.

Crews will continue to work into the night fighting the fire at the recycling plant in Salford. Approximately 30 firefighters are working at the scene using multiple jets and specialist vehicles to extinguish the flames.

Group Manager, Tony Bryan said: "Crews have done a fantastic job in containing the fire and we are working closely with partner agencies to ensure that the fire in under control and are ensuring that there is no further fire spread.

"There are large quantities of smoke into the area due to several hundred tonnes of waste involved with the fire. I must remind everyone in the local area to close windows and doors to protect themselves from exposure to smoke.

"Crews will continue to work hard into the night and the next phase of the incident will be extinguish the fire fully."

50 firefighters are continuing to tackle the blaze involving a large recycling plant in Frederick Road, Salford.

Crews are using multiple jets, ground monitors, an aerial appliance and a specialist vehicles to tackle the fire at JWS Waste and Recycling.

Officers are working with partner agencies to make the area safe and bring the fire under control. The fire is producing a lot of smoke so please ensure windows and doors are closed if you live locally.

Nearby roads will remain closed as crews work to contain the fire and extinguish the flames.

At 5.30pm Greater Manchester Fire and Rescue Service were called to a fire involving a large recycling plant in Frederick Road, Salford.

If you live locally, please ensure all windows and doors are closed due to the amount of smoke in the area.

A number of nearby roads have closed –