Throughout the night, heavy rain has helped to extinguish the fire, which firefighters were originally called to at around 2.20pm on June 2.

A wildfire officer remains on the scene monitoring the situation, with a number of deep seated located. The rain is forecast to continue this morning and once it stops an assessment will be made on what fire services resources are needed at the scene. 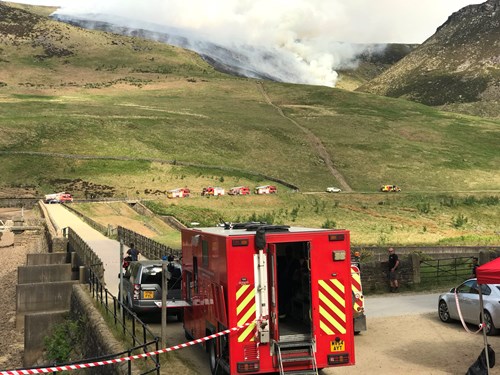 We have additional crews and resources en route to the scene to back up the operation into the night.

If you still find yourself in the local area please leave immediately. The roads here are very narrow and fire engines need the space to manoeuvre.

Head of Operational Assurance and Performance, Area Manager Ben Levy, who attended the scene earlier to support the response to this emergency described the scene:

"Crews have battled very harsh conditions in steep, uneven terrain to fight this fire. Additional hazards caused by wind threatening to spread the fire onto a vast expanse of tinder-dry moorland.  Specialist fire investigators are on the scene seeking to determine the cause.  In the meantime, I urge everybody to take extra-special care when enjoying our open spaces at this time of year, in conditions that can easily lead to large outbreaks of fire like this."

Fire fighters are now supported by a helicopter from United Utilities which is supporting the effort to extinguish this large fire.

The fire remains around 600m by 200m and the wind is blowing in a North West direction.

Firefighters are continuing to tackle a large moorland fire in Oldham.

The fire involves around 600m by 200m of dry moorland. Ten fire engines, a wildfire unit and a Burn Team from Lancashire Fire and Rescue Service are in attendance.

A Wildfire Unit from West Yorkshire Fire and Rescue Service has also been requested to attend.

Firefighters are currently at the scene of a moorland fire in Oldham.

GMFRS was called at 2.20pm, to reports of a moorland fire near Holmfirth Road, Oldham, close to Dove Stone Reservoir.

There are currently ten fire engines in attendance tackling the fire.

The fire is producing a large amount of smoke. Please can people avoid the area while firefighters tackle the fire and if you live near by keep your windows and doors closed.