Two fire engines and specialist support appliances remain at the scene of an industrial yard fire on Moat House Street in Ince, Wigan, having worked throughout the morning to bring the fire under control.

Traffic diversions on Manchester Road have now been lifted, but a cordon is still in place on Moat House Street and members of the public are asked to avoid the area.

Station Manager Chris Evans, in charge at the scene, said: “This incident has presented a number of challenges but I’m pleased to say that, thanks to the hard work of our crews throughout the night and into the morning, we’ve made good progress and have contained the fire.

“Firefighters remain at the scene, using two jets and an aerial appliance to tackle the flames. We’re now utilising a digger provided by Wigan Council to move around 20 to 30 tonnes of tyres and gain access to the remaining pockets of fire, and are working alongside colleagues from the Environment Agency to contain fire water run-off.

“I want to thank local residents for their cooperation and support throughout the morning, and ask that people in the area continue to keep their windows and doors closed due to the smoke from the incident, and avoid the area while crews carry out their work.”

Firefighters are expected to remain at the scene into the afternoon. 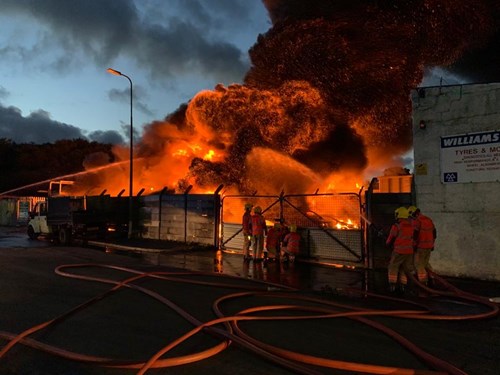 Roughly 30 firefighters from stations including Atherton, Bolton Central, Leigh, Stockport and Wigan were called at 3.22am and were quickly on the scene. They are currently engaged in tackling a blaze involving an outbuilding, piles of tyres and numerous vehicles including at least one heavy goods vehicle.

The fire measures roughly 30m by 20m and firefighters are using four jets and a hose, targeting specific sectors of fire.

There is a significant amount of smoke in the vicinity so local residents are asked to keep the windows and doors of their homes and businesses closed at this time.

A section of the A577 Manchester Road, a major artery between Wigan and Hindley, will be closed for a time. Road users are encouraged to find alternative routes into the town and keep the area clear of traffic to allow for easy access of emergency service vehicles.