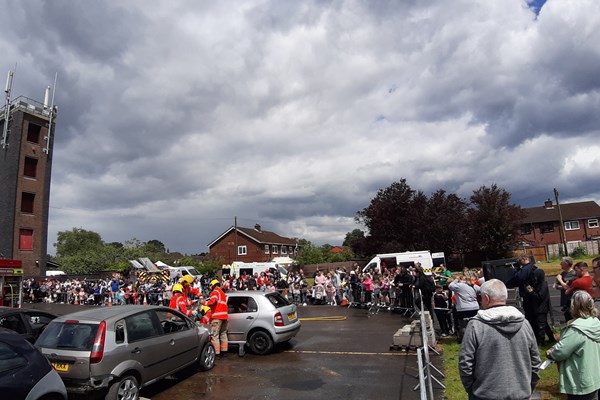 AS THE first anniversary of two teenage boys drowning on holiday approaches, Greater Manchester Fire and Rescue Service (GMFRS) is working with their loved ones to remind people of the dangers of swimming in open water.

Jason Varghese (15) and his older cousin Joel Aniyankunj (19) from Bolton were on holiday in Austria last summer, and both drowned while on a boat trip with their family members on August 23, 2018.

Following on from the tragic accident Jason’s and Joel’s loved ones are urging young people not to swim in open water – both at home and on holiday – while also reaching out to parents to raise awareness and save others the heartache they have experienced.

Jason’s mum, Suby Varghese, said: “We all went on a much-awaited holiday to visit family members in Austria. There were eight of us in total.

“The heat became too much for us so our relatives decided that a boating trip would be nice, and we thought ‘that’s fine’ and that the kids would go for a swim - so we gave them their swimming costumes and off they went.

“We received a call from relatives to say ‘you need to come’, but they didn’t tell us anymore. Jason had gone into the water for a swim but soon got into distress. Our younger son Jenson says he thought he heard Jason saying that he was sinking.

“Joel, our nephew, went in the water to help Jason then they both disappeared under the water.”

Emergency services arrived quickly but couldn’t find Jason and Joel due to the thick undergrowth.

Suby continued: “Both boys were strong swimmers but they became tangled in the weeds. The search went on for hours and professional divers found them later on in the day.

“Parents should be aware of dangers around open water – we don’t want any other family to go through what we have – we miss them every day. They were so full of life and we can’t get over the fact they’re still not here – it’s still very raw, as if it happened yesterday.

“They were loving, caring boys – there was never a bad thing to say about them. The fact that they’re not here is heart-breaking – had we known the dangers we wouldn’t have sent them that day. Please don’t swim in open water.”

Jason was a student at St James’ High School in Farnworth, and was due to start his final year there in September 2018.

Tania Lewyckji, Head teacher at St James’ said: “Last summer was a very difficult time for our school – we lost one of our valued students, Jason, in a tragic drowning accident while he was on holiday with his parents.

“This has had a massive impact on the school as you can imagine, when Year 11 came back from the holidays – all our children sit in the same seat in assembly from Year 7 to 11 and for the first time there was an empty chair. And that really hit home with the children.

“Jason was kind and caring, and lived our ethos of caring for others and achieving excellence. He was a lovely young man, had lots of friends, was sporty, and enjoyed life. There’s been different times through the year when we have really missed him – like when his results came in for his GCSEs.

Sharing their experiences of losing one of their best friends and the impact it has had on them and are Robbie Woodcock and Sam Gibbons, who are now both 16-years-old.

Robbie said: “Last year I was talking to Jason before he went on holiday about joining the gym, and a few days later I got a message to say he had drowned on holiday.

“Since Jason has passed away we all miss him loads, especially at times like our prom – which he was really looking forward to and it’s a shame he wasn’t there with us.”

“Please don’t swim in open water – we don’t want anyone to go through what we all have since losing Jason.”

Sam said: “I was on holiday at the same time as Jason and I got a text from Robbie. At first I didn’t believe it because we had recently all been talking in a group, and before that we had played football together. It hit us all hard.

“We just feel that without Jason here we miss his presence and laughter. In the limo for our prom it just wasn’t the same. We notice him missing from our group of friends – there’s always one person missing, and that’s Jason.”

Robbie and Sam are part of a larger group of friends, who all miss Jason greatly.

Area Manager Damian O’Rourke from Greater Manchester Fire and Rescue Service said: “We really appreciate Jason and Joel’s loved ones supporting our water safety campaigns and work. Hearing from people who have lost family members and friends is extremely sad but really helps strengthen our safety messages and advice, with the ultimate aim of keeping people out of harm’s way.

“This year’s partnership campaign Safe4Summer focuses on a number of key themes, including water safety - so our new suite of case studies involving Jason’s mum, friends and teacher, really do play an important role in reaching out to different audiences – whether that be to young people directly, or their parents and other family members.

“We don’t want to stop people having fun, however, safety is paramount so we want to remind young people, and their parents and carers, of the dangers associated with our water ways - so please take a look at our Safe4Summer website and watch the new videos highlighting just how easy people can drown in open water, and the heartache caused by such incidents.”