FIRE crews and officers were joined by partner agencies for their latest high-rise training. 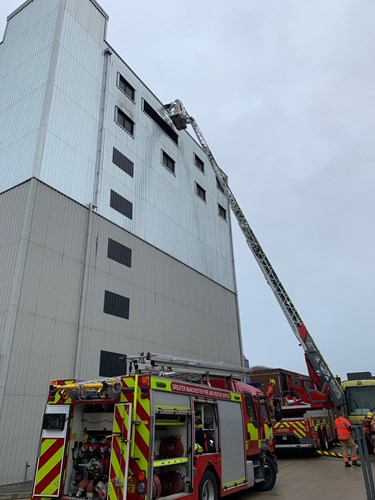 As part of its commitment to providing a fast, safe and effective response – as outlined in Greater Manchester’s first Fire Plan - Greater Manchester Fire and Rescue Service (GMFRS) delivers regular high rise training, with the most recent exercise taking place on Friday, February 18, 2022, at the Service’s Training and Safety Centre (TSC) in Bury.

The ’10-pump’ scenario saw the mobilisation of a Turntable Ladder, Command Support Unit, a Breathing Apparatus Unit and AIR Unit, alongside partner organisations to deal with the mock fire involving the fifth and sixth floors of a block of flats next to a Metrolink line.

The ‘incident’ occurred on the evening of a major football match at The Etihad, and involved several casualties and two fatalities, with injects throughout including disruption to city-centre traffic, reception centres being opened, investigations into modern slavery and a major incident being declared.

The organisation’s TSC allows the Service and its partners to carry out large-scale exercises simulating realistic, and often complex, incidents. Huge refurbishments are currently underway at the centre and will see the introduction of a cutting-edge Incident Command and Leadership Development Academy later this year as part of the GMFRS’ Estates Improvements Programme.