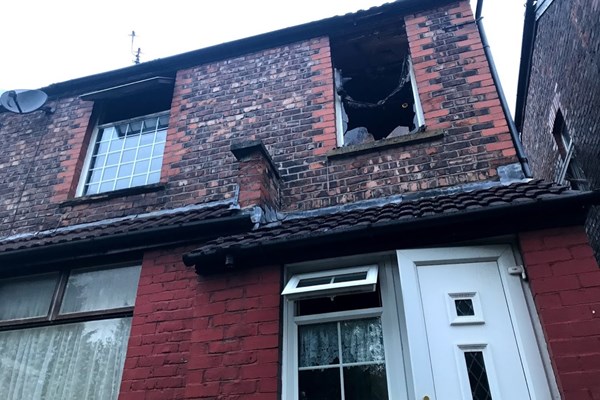 FIREFIGHTERS from Greater Manchester and Lancashire have worked together to tackle a fire involving a house in Wigan.

The fire broke out in a front bedroom of a semi-detached house in Saddleback Road shortly before 6am on Tuesday, December 17, 2019.

Two engines from Wigan Community Fire Station were joined by Lancashire’s Skelmersdale crew to deal with the incident.

Firefighters wearing breathing apparatus used hose reels to tackle the fire – which involved the upstairs of the house. They also used a high pressure fan to remove smoke from the house.

Prior to firefighters arriving at the address, two people – a man and a woman, both believed to be in their 40s – had left the property. They suffered from the effects of smoke and went to hospital.

Station Manager Chris Evans from Greater Manchester Fire and Rescue Service (GMFRS), was in charge of the incident.

Chris said: “The fire developed really quickly and caused extensive damage to the upstairs of the house. Crews worked really hard to prevent the fire from spreading to the adjoining property.

“A man and a woman had left the house when we arrived, and both suffered from smoke inhalation. We believe that they are both in their 40s and they were taken to hospital by ambulance.”

The fire damaged the upstairs of the house and the cause of the fire is unknown, although believed to have started accidentally in the front bedroom.

For tips to keep you safe at home please visit and for a free home safety check with GMFRS please call 0800 555 815.