The incident has been scaled back and one fire engine remains at the scene on Bradshaw Gate, in Bolton. Fire crews have been working overnight dampening down any remaining hot spots.

Students evacuated from a nearby accommodation block returned to their apartments at approximately 10pm last night.

At approximately 5.55pm on Tuesday, 19th April, six fire engines from Farnworth, Whitefield and Bolton stations, alongside the hydraulic platform from Leigh and a Command Unit from Rochdale, were called to reports of a building fire on Bradshaw Gate, in Bolton.

The fire involves a derelict building which was well alight when firefighters arrived at the scene. Firefighters wearing breathing apparatus are using hose reels and jets to extinguish the fire. 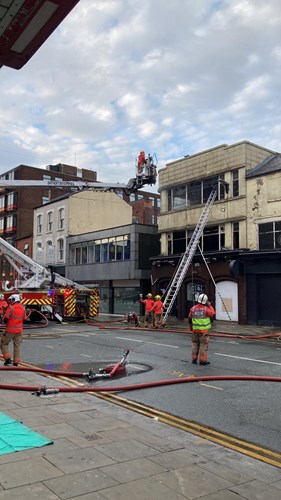 The building is located next to a student accommodation block which has been evacuated as a precaution. Bradshaw Gate is expected to remain closed for a number of hours and members of the public are please advised to avoid the area.

GMFRS Area Manager Ben Levy said: “We were called to reports of a fire at a disused building on Bradshaw Gate, in Bolton. Firefighters swiftly entered the building to tackle the fire using ladders and high reach aerial platforms.

“A significant amount of smoke had entered nearby student accommodation via open windows. As a result, the block was evacuated safely and quickly with no reported injuries. The students will be able to return to the building later this evening.

“Thanks to the quick response of our firefighters, the fire has been contained to the derelict building. Firefighters are expected to remain on scene for a number of hours and disruption to local residents should be over by the early hours of the morning.”