Firefighters from Greater Manchester Fire and Rescue Service (GMFRS) have been tackling a fire at a derelict nursing home in Trafford.

Crews were called to Penny Bridge Lane, Flixton, at around 11:45pm yesterday (Monday, February 3) to reports of a fire.

Seven fire engines, along with a turntable ladder and a command support unit attended the incident and found a fire involving a derelict nursing home measuring 50 metres by 50 metres.

Crews have used six jets, five breathing apparatus, one hose reel and a positive pressure ventilation fan and the fire is now under control.

Two fire engines and a turntable ladder remain at the scene this morning (8.30am Tuesday, February 4) to damp down and extinguish any remaining small pockets of fire. 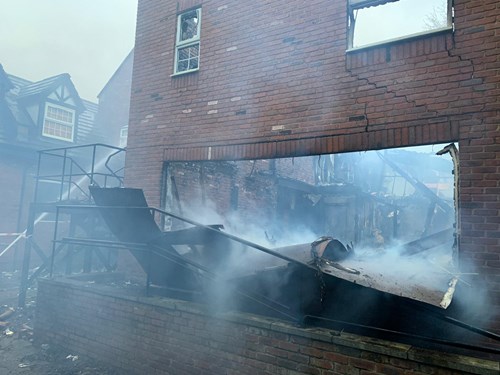 A number of road closures were put in place but these have all now lifted.

Station Manager Jon Hill said: "Our firefighters have worked hard through the night to get this incident under control.

"We have now largely scaled back and crews continue to damp down at the scene.

"We have now lifted all of the road closures that were in place so there should be no disruption to traffic this morning."

An investigation into the cause of the fire is ongoing.