Firefighters have worked through the night to tackle a large blaze on Regent Street in Oldham.

Thanks to the hard work of crews, operations have been scaled down to one fire engine and one aerial appliance.

Crews are currently using a thermal imaging camera to check for any hotspots and are damping down.

A safety cordon remains in place and Regent Street and Beech Street closed. This has no impact on local Metrolink services. 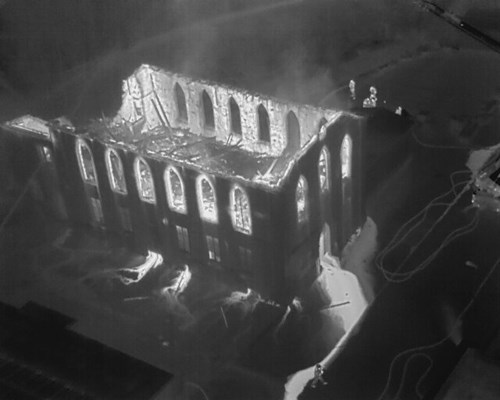 Firefighters are working hard to tackle a fire at a commercial building on Regent Street in Oldham this evening.

Crews were first called to the scene of an old church at 9.11pm and there are currently six fire engines and an aerial platform in attendance.

Firefighters are tackling the 15 metre by 30 metre blaze in three sectors, using handheld jets and the aerial platform to put water on the fire from above.

Station Manager Nicholas Griffin said: “Our crews are working extremely hard to extinguish this fire and are expected to remain at the incident for a number of hours.

“I’d like to praise crews for their swift response to incident and containing the fire, which is now very unlikely to spread to other buildings.

“We are urging local residents to avoid the area and to keep windows and doors shut if they live nearby.”