Over the weekend crews were damping down the final hot spots at the scene of a large commercial fire in Old Trafford.

Crews left the scene early on Saturday afternoon and returned on Sunday morning after two or three small pockets of fire were spotted before being quickly extinguished by firefighters.

Due to the extent of the damage caused by the fire, demolition work is having to take place to make the building safe.

You can find out the latest here 👉https://t.co/DCJ4Nq983Y

This video footage shows the extent of the fire early on Friday morning 📽️ pic.twitter.com/u2Q13nVTEw

ALL cordons have now been lifted in the Old Trafford area, apart from a number of pedestrian cordons and all residents have been allowed to return to their properties.

Fire crews will remain at the scene of the blaze throughout the night as they continue to damp down and make the area safe.

UPPER Chorlton Road has now reopened but firefighters will remain at the scene of a fire at a commercial property in Old Trafford overnight.

Crews are continuing to damp down and have now scaled back down three pumps and one aerial appliance.

Some of the 45 residents that have been evacuated from homes nearby, due to the presence of gas cylinders, have been allowed back in, however those living closer to the fire are still not allowed to return to their properties.

Trafford Council is working with people who have been affected to find them alternative accommodation if necessary.

Road closures remain in place so people are asked to avoid the area. Crews will be at the scene into tomorrow morning and we are working to lift road closures as soon as possible.

Cllr Andrew Western, Leader of Trafford Council, said: “We have been working closely with Greater Manchester Fire Service to ensure our residents are kept safe and kept informed.

“Our number one priority is the wellbeing of our residents. This is why we opened up Limelight Community Health and Wellbeing Hub to people who were evacuated from their homes because of the fire. We have since been liaising with them to ensure they have accommodation overnight while the fire service continue to make the area safe.

“I would like to thank our Council officers who have been working tirelessly since the early hours to ensure the wellbeing of our residents, and would also like to express my gratitude to the brave firefighters who have been dealing with this devastating fire.”

Road closures remain in place so people are asked to avoid the area. Crews are expected to be at the scene into tomorrow morning but road closures will be lifted as soon as possible. FIREFIGHTERS have brought a large fire at a commercial property in Old Trafford under control.

Six crews and two aerial appliances remain at the scene tackling the blaze and road closures remain in place.

Two gas cylinders have been found inside the property and firefighters are also working to keep these cool. 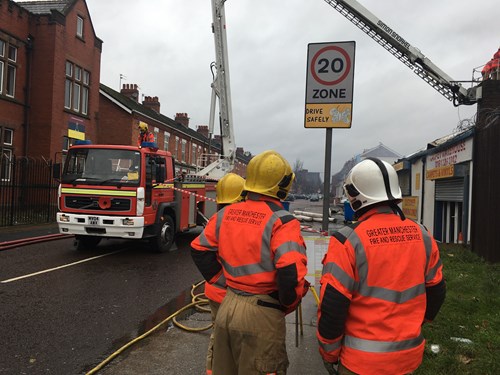 The incident is causing some traffic disruption so people are asked to continue avoiding the area, residents should also keep their windows and doors shut.

Firefighters are expected to remain in the area for some time to tackle the fire and make the area safe.

Around 45 people had to be evacuated from nearby properties as a precaution and Trafford Council are working with them.

The fire is not believed to be suspicious but an investigation will take place in due course.

Group Manager Paul Duggan said: "Crews have done a fantastic job tackling this difficult fire and while it is now under control we will be on the scene for some time dealing with this incident.

"I know this has caused disruption to people living nearby and road users and I would like to apologise for this but assure people we are working hard to get roads opened and people back into their homes as soon as we can." FIREFIGHTERS are currently at the scene of a large fire in Old Trafford.

Crews were called to a commercial property in Darnley Street shortly before 5am today and found the units well alight.

The fire measures 30m x 30m and nearby properties have been evacuated as as a precaution. 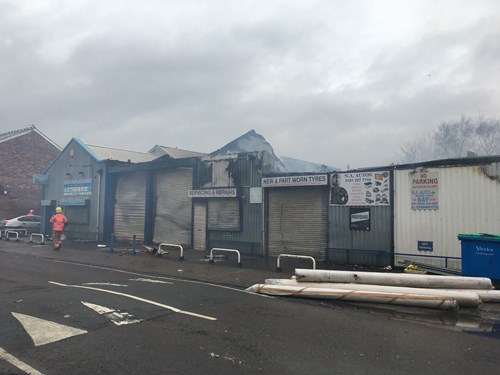 10 pumps and two aerial appliances are currently fighting the fire and a cordon is in place.

People are being asked to avoid the area and nearby residents should keep their windows and doors shut.