AT 3.12pm on August 6, 2019, ten fire engines were mobilised to a fire at a commercial unit in Oxford Street East, Ashton-under-Lyne.

Fire crew currently in attendance are wearing breathing apparatus to tackle the fire from inside the building using jets.

The building was evacuated prior to the arrival of the fire service. Firefighters will continue to carry out a search of the building.

The three storey commercial building is now fully involved in fire, and fire has spread to an adjacent building.

11 pumps are in attendance along with two aerial appliances which are putting water onto the fire from above.

A large amount of smoke has been discharged over the local area and is travelling in a north easterly direction towards Saddleworth and Mossley.

If you are local to the area please keep your doors and windows closed and avoid the immediate vicinity of the fire to allow our crew to work efficiently. 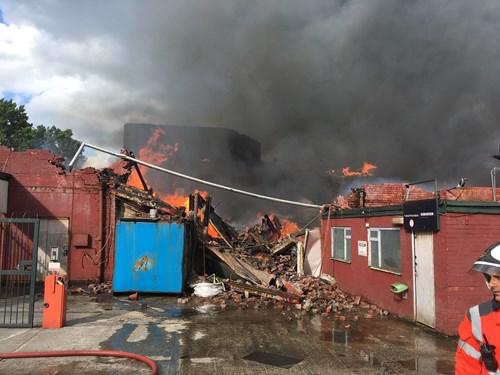 Roughly 50 firefighters continue to battle a blaze at a large commercial premises on Oxford Street East in Ashton-under-Lyne, and will be at the scene into the night.

Fire first broke out at the three-storey building at around 3pm this afternoon (Tuesday 6 August) and crews were quickly in attendance, using jets on the ground and aerial appliances to angle water from above.

Paul Etches, Area Manager for Greater Manchester Fire and Rescue Service (GMFRS), said: “I want to praise our hardworking GMFRS firefighters who have been working steadily all evening. We expect to be at the scene into the early hours and have just provided fresh crews to handle the incident. We have separated the scene into different sectors of firefighting, which is allowing us to focus our efforts on specific pockets and make steady progress.

“This fire is ongoing. I want to reassure local people that, although there is a lot of smoke in the area and we are still asking nearby residents to keep windows and doors closed, we are continuing to do everything we can to bring this fire fully under control.”

Electricity to some local properties has been affected, with the local authority assisting residents from around 50 homes which will have no power overnight. Stockport Road, the A6017 between Guide Bridge railway station and St Peter’s Church, is closed to traffic and will likely remain so into the morning. 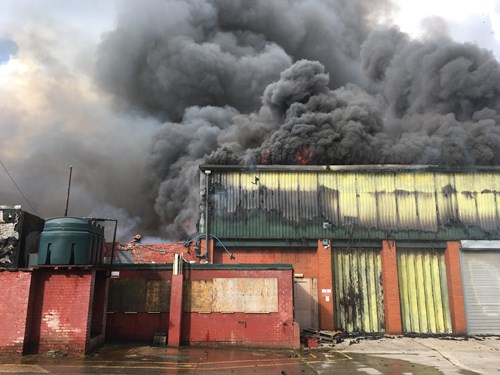 Greater Manchester Fire and Rescue Service (GMFRS) continues to fight a large-scale fire at a commercial unit on Oxford Street East in Ashton-under-Lyne, more than eight hours after first being called to the incident.

Three multistorey buildings containing a number of small local businesses are involved in the fire, with 15 fire engines and approximately 70 firefighters engaged in extinguishing the flames from ground level and from above using jets.

Water drawn from the local supply has been supplemented from the nearby Ashton Canal while electricity to 50 local properties has been affected, with power unlikely to be restored before the morning.

The fire is contained to the three mill buildings on Oxford Street East. However, local residents on Gibson Terrace have been evacuated as a precaution and are being supported by Tameside Council to move to a place of safety.

Paul Etches, Area Manager for GMFRS, said: “Crews continue to work exceptionally hard to bring this major fire under control. Throughout the evening firefighters from 10 fire engines had been making steady progress, but at around 9pm a third building on the site caught fire and that necessitated us calling upon a further five crews from across Greater Manchester.

“Parts of all the buildings affected have collapsed and we continue to fight the fire in sectors, allowing us to focus on specific pockets of the blaze in a concerted effort to get the whole incident under control.

“As a precaution I’d encourage anyone living or working locally to keep your doors and windows closed. Please also keep the area free of traffic to allow emergency service vehicles quick and straightforward access to the scene.

“GMFRS will be here through the night, working to get on top of the situation and keeping local people safe and reassured. We will be here until this fire is out.”

Stockport Road, the A6017 between Guide Bridge railway station and St Peter’s Church, is closed to traffic and will likely remain so into the morning.

Public Health England further advise the local population that risks to health from the Ashton incident are low, however because any smoke is an irritant, it can make people’s eyes and throat sore.

People with asthma and other respiratory conditions may be particularly susceptible to the smoke and should carry and use their medication (such as inhalers) as usual. 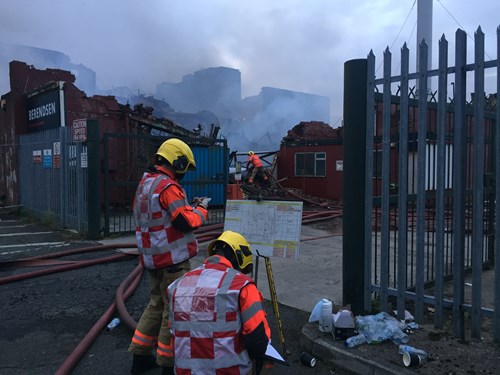 Firefighters have made good progress during the night tackling a blaze at a commercial unit on Oxford Street East in Ashton-under-Lyne.

Roughly 30 firefighters remain at the scene using hoses from six fire engines plus two aerial platforms to battle the flames which are still present across three mill buildings on the site.

At its height around 10.30pm 75 firefighters from across Greater Manchester were involved in tackling the incident and electricity was cut to roughly 50 nearby homes as a precaution. Power has now been restored to all but those properties on Gibson Terrace, with residents expected to be able to return to their homes later this morning.

Jason Rain, Group Manager for Greater Manchester Fire and Rescue Service (GMFRS), said: “Our firefighters have done an exceptional job tackling this large-scale fire over quite a long period of time – GMFRS have been on the scene since just after 3pm yesterday afternoon.

“The three mill structures affected have each caught fire and there is still active firefighting taking place. All three structures have suffered partial collapse and are unstable, so safety cordons are in place across the site.

“We continue to fight the fire from the ground and above and are also monitoring the potential spread of airborne embers. I would like to thank local residents for their support and co-operation – roughly 50 local people were helped into alternative accommodation by colleagues from Tameside Council overnight and it won’t be until mid-morning at the earliest before some are able to return home.

“It is too early at this stage for us to know the cause of this incident and we expect to remain at the scene throughout the day, damping down the fire and monitoring the site for hotspots.”

Stockport Road, the A6017 between Guide Bridge railway station and St Peter’s Church, is expected to reopen soon but there is no access to the nearby Ashton Canal towpath. The next multi-agency meeting between emergency services, the local authority and others is scheduled for 9am.

This drone footage taken yesterday shows just what our #firefighters were faced with tackling the mill fire in Ashton. They have done an amazing job tackling this large-scale incident that's been going on nearly 24 hours now. pic.twitter.com/HPpjQf1JXO

Firefighters are making great progress fighting the large-scale fire at a commercial unit on Oxford Street East in Ashton-under-Lyne.

There are currently 6 fire engines and two hydraulic platforms at the scene dampening down the whole site.

Greater Manchester Fire and Rescue Service Incident Commander, Lee Coleman said: “This has been a significant incident, it is because of the professionalism and dedication of our firefighters that we have got to the position that we are in today, where we are using less resources at the scene.

“Our firefighters worked tirelessly through the night to get us to this position, however due to the nature of the building and the way it has collapsed, firefighters will be here for quite a few days understanding what has happened and ensuring the whole area is safe.

“As part of this approximately 50 residents were evacuated overnight, these residents are being looked after by Tameside Council and it will be reassessed whether they can return to their homes tomorrow.”

Tameside Council continue to work with the evacuated residents to ensure their safety and wellbeing.

Tameside Council Executive Leader, Councillor Brenda Warrington, said: “Firefighters have made excellent progress overnight working to tackle the blaze and reduce the smoke plume. However, as a precaution it was necessary to ask a number of our residents in the area to leave their homes and move to a place of safety.

“Our Emergency Team and Incident Officers from across the council supported the evacuation of residents overnight. Those affected were contacted door to door and have been provided with beds, hot food and drinks at our rest centre.  Roughly half of the residents were able to make their own arrangements to stay with family or friends overnight, with approximately 23 people from Gibson Terrace staying at the rest centre at Ryecroft Hall.

“The situation will be reviewed tomorrow as to whether residents can return to their homes but in the meantime Jigsaw homes will now support in providing temporary accommodation for those residents still at the rest centre. I’m pleased to see such a swift, comprehensive and personal response to ensure the safety of our residents from across the council and our partners. We will of course continue to support the fire service throughout the incident and keep those directly affected and surrounding areas aware of any updates.”

Firefighters from Greater Manchester Fire and Rescue Service continue to 'damp down' at the site in Ashton-under-Lyne after a large fire broke out more than 24 hour ago.

From around 7pm tonight our attendance in Oxford Street East will reduce to around 20-25 firefighters and officers, with four fire engines and supporting appliances.

Also this evening demolition will begin on site - with firefighters and officers working closely with the demolition company as they pull down the affected buildings in sections, allowing firefighters to tackle remaining pockets of fire.

Four fire engines remain at the site in Ashton-under-Lyne after a large fire broke out just after 3pm on Tuesday 6 August.

Firefighters from Greater Manchester Fire and Rescue Service are continuing to ‘damp down’ the site.

Crews are continuing to damp down hot spots at the scene of a large fire in Ashton-under-Lyne.

There are now two pumps and one aerial appliance remaining at the scene.

The latest from Tameside Council can be found here: https://www.tameside.gov.uk/Newsroom/Ashton-fire-update-7-August-2019