GMFRS firefighters have now left the scene of the incident in Summerseat. GMFRS crews have been in attendance since around 9.30pm last night.

Greater Manchester Police and a number of partner agencies remain in attendance to monitor the situation.

Fire service crews and fire scene investigators will return tomorrow morning as a thorough investigation into the causes of the incident is carried out.

GMFRS will be at the scene over the next few days as the investigation continues. 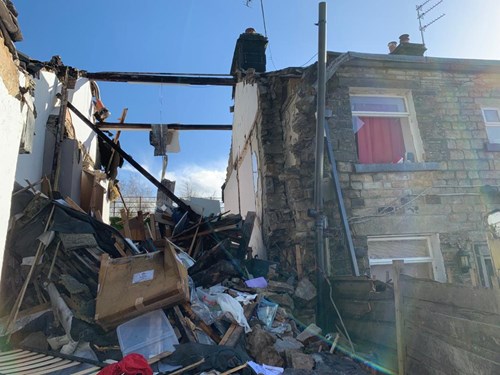 One GMFRS crew, alongside fire scene investigators, remains at the scene of a collapsed house in Summerseat, Bury.

The firefighters, from Bury station, are monitoring the structure of the affected mid-terrace home and neighbouring properties in the immediate vicinity.

If emergency services deem it safe, firefighters will assist local residents back into their homes this lunchtime. Where others need to remain out of the houses for the time being, firefighters will access homes to retrieve essential personal items including medication, mobile phones, bank cards and so forth.

Watch Manager Steve Wilcock, Incident Commander at the scene, said: "I want to first pass on my condolences to the family and friends of the woman who tragically lost her life at this incident - our thoughts are with them at what must be an incredibly sad and difficult time.

"Given the nature of this scene I must also praise the professionalism and dedication of the firefighters who have worked here all night in the driving rain, as well as throughout the morning. An investigation is now under way so it would not be appropriate to speculate at this time on a probable cause.

"It's also important to place on record our appreciation for the help and co-operation of local people. Summerseat is a close-knit community and there has been an outpouring of support, with many neighbours offering their homes to those evacuated from roughly 20 houses last night. I am proud to serve this community and GMFRS, GMP, Bury Council and other partner agencies will continue to work really hard today to do the best by local people without compromising the scene."

At 9.21pm on 17 February 2021 fire engines from Ramsbottom, Whitefield, Bolton North, two Technical Response Units from Leigh and Ashton under Lyne, and the urban search and rescue dogs from Lancashire and Merseyside Fire and Rescue, responded to reports of an explosion and collapsed property on East View, Summerseat.

Firefighters are in attendance using two breathing apparatus and one hose reel to extinguish seats of fire. Evacuation of neighbouring properties was carried out by Greater Manchester Police.

The incident is ongoing.